The Universal Vitar: The Spare Parts Camera & The Univex Story

To appreciate the Universal Vitar, one must first know how it came to be. Universal Camera Corp., with headquarters in New York City, was founded in 1932 by Otto Githens and Jacob Shapiro. The company produced several cameras during the 1930’s and 1940’s starting out with less expensive plastic cameras and moving on to better quality, more expensive cameras. The first camera produced was the Model A, a subminiature roll film camera that sold for the amazing sum of $.39 (39 cents!). It became a huge success, selling over two million in the first year alone. 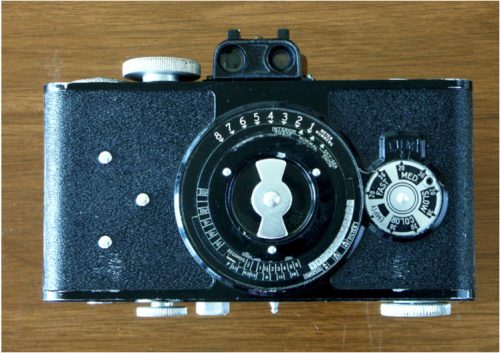 Fast forward to the late 1940’s. With increased competition and the arrival of both the Stereo Realist and the Polaroid Land Camera, together with unwise business decisions, sales of Universal cameras began to decline rapidly (The Univex Story, Cynthis Repinski, p. 207). By 1950, Universal’s employment rolls diminished considerably, from a high of 1200 to less than 200, and it was evident that the company would not survive.

By 1951, Universal had an abundance of leftover parts for cameras that had not sold, so they decided to assemble new models by combining parts of different cameras. They designed three “new” models using the spare parts, one of which was a 35mm camera named Vitar, shown here. The body, viewfinder/extinction meter combination and hot shoe came from the Corsair; the retractable lens barrel and shutter housing from the Buccaneer; lens and shutter from the Uniflex; and various parts of other cameras. Only the name plates were new. 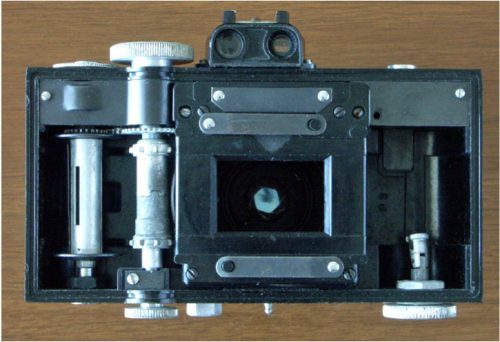 The Vitar was equipped with a coated 50mm f/3.5 Universal Tricor lens set in an auto retractable mount with minimum focusing distance of three feet. Other features included double exposure prevention and built-in photoflash synchronization. Shutter speeds range from 1/25 – 1/200 second plus B, and the aperture range is from f/3.5 – f/16. Original list price was $41.00 and it was produced in limited supply, so the Vitar would be a rare find indeed.

In 1952, Universal filed a voluntary petition for reorganization under Chapter XI of the Bankruptcy Act. Universal’s only remaining operations during the late 1950’s and early 1960’s consisted of film processing and camera repair. The company ultimately filed for bankruptcy, and in 1964 the final years of the Universal Camera Corp. came to an end. 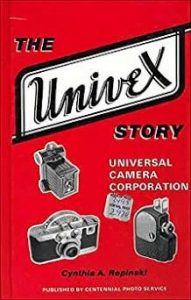 Largely forgotten as a camera manufacturer, The Univex Story by Cynthia Repinski, Centennial Photo Services, 1991, tells the story of the Universal Camera Corporation, founded in New York in 1932. The book is widely available and highly rated by Goodreads. The book’s description states:

“This is a superbly researched and richly illustrated history of the legendary company which flourished in the 1930s through 1950s. Many of the mysteries and rumors surrounding the company are finally brought to light. The narrative is fascinating as it traces the company history from beginning to end. Every camera model is illustrated and its history and development detailed. In addition to the in-depth information on cameras, other Universal products, such as binoculars and military instruments, are included to give a well-rounded view of the company.”

While the company’s rise and fall as a camera manufacturer ended in the 1950s, the Universal Camera Corp. was immortalized in a labor dispute ruling in 1951 by the United States Supreme Court (Universal Camera Corp. v. NLRB). Justice Felix Frankfurter wrote the opinion establishing a standard for “substantial evidence.” The Court found that:

The ruling has stood as the leading case for “substantial evidence” in labor law for over seventy years.

Bright yellow was a popular color for waterproof electronics in the 1980s; the Sony Walkman is a prime example. Minolta followed suit with its bright yellow waterproof cameras, one “for each of the popular film formats, 110, 35, and APS,” 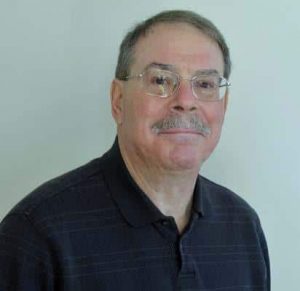 June 2020: A Letter from the President of PHSNE Joel Moses

To the PHSNE Membership: The past few months have seen dramatic changes in how organizations function and communicate. A variety of questions are coming to the Board of Directors which I would like to address. With the disruption caused by 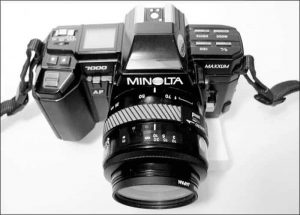 From time-to-time, PHSNE’s warehouse crew comes across an unusual camera as they sift through donations and prepare for auctions. One recent find was a Minolta Maxxum 7000, destined for Photographica 89, PHSNE’s one-day dealer show, sale, and auction for everything