Hugh Nini and Neal Treadwell (above, left), a married couple since 1992, published their book in the fall of 2020, based on their extensive collection of over 3200 vintage photos spanning 100 years, from the 1850s–1950s. Each image, from their collection and book, depicts romantic, loving, male couples in never-before-seen vintage photos. These rare photos provide a glimpse into a previously undocumented history. 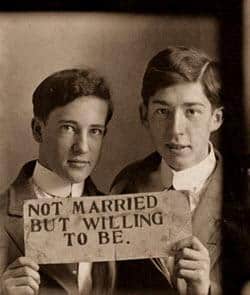 An early photograph from “LOVING“

In the late 1990’s, Neal and Hugh started collecting photographs purely by accident. The first photograph, from an antique store in Dallas, was of two men in a loving embrace; it was mixed within random photos of a Dallas neighborhood from the 1920s. LOVING: A Photographic History shines a new light on the most written about, dramatized, or filmed emotions – love. The pages of the book portray love, but also courage – the courage that it took to memorialize that unmistakable look that occurs between two people in love, and celebrates a loving past – a past that points towards the future. It’s message is for everyone. It’s universal.

Hugh Nini, Texas-born and bred, owned and operated the Denton Ballet Academy, for thirty-three years before moving to New York City in 2012. In 1988 he founded the Festival Ballet of North Central Texas and served as its Artistic Director for twenty-five years, Hugh considers his wonderful husband to be the second luckiest guy in the world. Meeting, falling in love with, and marrying Neal, makes him the luckiest guy in the world.

Neal Treadwell, also born and raised in Texas, grew up in the cattle industry, working for the family business. He participated, very briefly, in the rodeo circuit as a bull rider. After his university years when he received an Art Degree from Midwestern State University, he worked in the “C” industries: Cattle, Clothing, and Cosmetics. Hugh and Neal met in March of 1992. Though they consider themselves to have been married for 28 years, they took the earliest available opportunity to legally establish their union in 2006 when Massachusetts became the first state to pass marriage equality.

LOVING has been ranked #1 in six categories at Amazon including Photography History, Lifestyle Photography, Wedding Photography , LGBTQ Demographic Studies, and more. Published in five languages—Engish, French, German, Italian, and Spanish—LOVING has garnered more than 200 unique articles and TV segments from more than twenty-seven countries to date.

~Images courtesy of the Nini-Treadwell Collection, from their book Loving © 2020 5 Continents Editions s.r.l 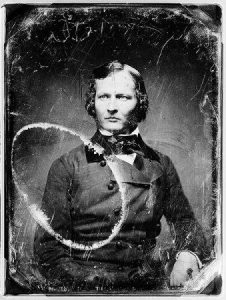 Sometimes photo history just drops something remarkable in your lap. In this case, PHSNE’s esteemed newsletter editor Beverly Regelman came across The Public Domain Review and put a short note in the March 2022 issue of snap shots. Founded in 2011, 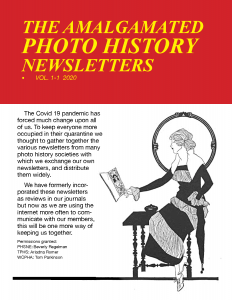 There was no PHSNE meeting scheduled for July 2020. See the July 2020 PHSNE email newsletter for updates here. A newsletter exchange program among photo history groups got underway in June, with a number of newsletters shared among member groups

From time-to-time, PHSNE’s warehouse crew comes across an unusual camera as they sift through donations and prepare for auctions. One recent find was a Minolta Maxxum 7000, destined for Photographica 89, PHSNE’s one-day dealer show, sale, and auction for everything